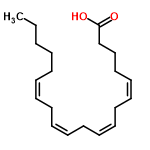 Researchers at the Gladstone Institute of Neurological Disease at the University of California San Francisco have found that removing a brain enzyme that regulates the concentration of arachidonic acid, a fatty acid, reduces cognitive deficits in a mouse model of Alzheimer’s disease (AD). The discovery, reported in Nature Neuroscience, may one day lead to a novel therapeutic strategy for the disease.

Alzheimer’s causes a progressive loss brain cognitive functions and is a terminal disease. There are treatments that can alleviate symptoms, but there is no cure.

“Several different proteins have been implicated in Alzheimer’s disease,” explains GIND’s Lennart Mucke, “but we wanted to know more about the potential involvement of lipids and fatty acids.”

Fatty acids are rapidly taken up by the brain and incorporated into phospholipids, a class of fats that form the membrane or barrier that shields the content of cells from the external environment. The scientists used a large scale profiling approach (“lipidomics”) to compare many different fatty acids in the brains of normal mice with those in a mouse model of Alzheimer’s disease that develops memory deficits and many pathological alterations seen in the human condition.

The most striking change discovered was an increase in arachidonic acid and related metabolites in the hippocampus, a memory center that is affected early and severely by Alzheimer’s disease. Arachidonic acid is thought to wreak havoc in the brains of the mice by causing too much excitation, damaging neurons. By lowering arachidonic acid levels, the researchers found they could allow neurons to function normally.

In general, fatty acid levels can be regulated by diet or drugs, which could have important therapeutic implications. A lot more work is needed before this strategy can be tested in humans.