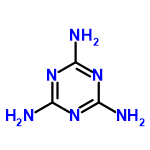 A fast and inexpensive melamine detector is reported in the RSC’s journal ChemComm this week. The research follows hot on the heels of the melamine in milk scandal of 2008 and the petfood contamination in 2007 and earlier. The two techniques are based on mass spectrometry and could be adapted to provide on-site kits that would require little training to use.

Melamine, commonly used as a fire retardant and polymerized to a plastic resin, was added to milk during processing to artificially boost its apparent protein content.

David Muddiman, professor of mass spectrometry at North Carolina State University, Raleigh, US, describes the techniques as “marvellous examples of how innovative, direct analysis ionisation methods, when coupled with mass spectrometry have the ability to address contemporary problems facing the world. The [researchers have removed all the major obstacles allowing for mass spectrometry not only to compete, but to take the lead in these types of analyses.”