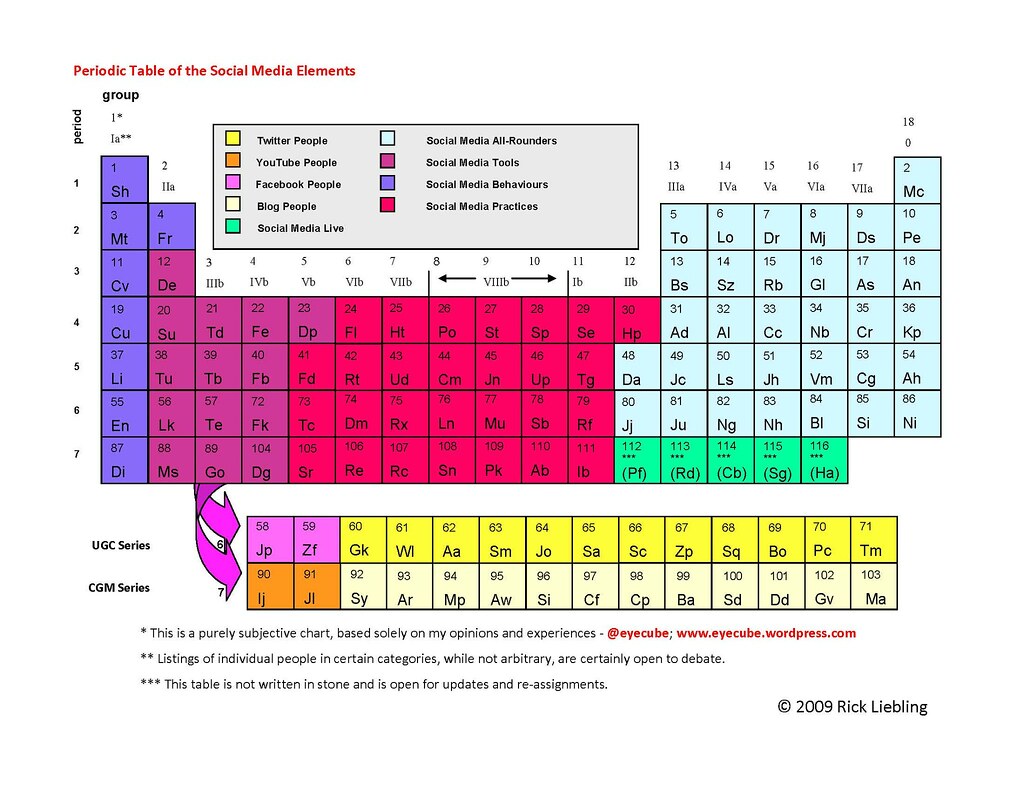 Marketing expert Rick Liebling sketched a Periodic Table of Social Media Elements, which is garnering a lot of interest in the blogosphere. In it, Liebling gives each elemental square an abbreviation representing a particular well-known face on Twitter, LinkedIn, Flickr, Facebook etc.

Social Media really is a lot like chemistry. There is a huge pool of elements you can choose from and an infinite variety of combinations you can create.  Twitter + sharing + commenting will give you a different result than blogging + LinkedIn + Flickr.

It looks like a bit of fun, but as a viral marketing exercise it has really taken off and is getting Liebling a lot of traction. Some of the people included in the table have expressed their pleasure but have described the Table as a total mystery. That’s not surprising because in the context of the real PT it is meaningless.

I hadn’t realised, until I read a critique elsewhere, that this is meant to be a “serious” project. I thought it was just a bit of fun. It certainly has no real relevance to chemistry or science, not even social science. The classification, color scheme, and layout may resemble the chemistry Periodic Table, but they’re as valid as the postures in the Periodic Table of Yoga and the classic PT of Sexual Positions. In other words, they’re not valid at all. Liebling admits as much in the post and in his follow-up defensive post. I’m not particularly concerned by his apparent hijacking of our sacred manuscript

Fundamentally, Liebling has created a nice graphic in the shape of the Periodic Table. It’s acted as a clever piece of link bait for his site (see, it even worked on me), got him lots of comments on his blog, some critical, some supportive, many confused by chemistry and science.

Sadly, his use of the graphic and the majority of comments point to a woeful lack of understanding of one of the most elementary principles of nature. It’s quite unfortunate how many people are amused by their own ignorance of science, most of them would not find it funny if they didn’t understand Facebook or Twitter, but which is more important? After all, if it weren’t for the quantum mechanics inherent in the periodicity of the elements there would be no semiconductor technology and without that there would be no computers, no Facebook, no Twitter, and no blogs…