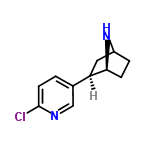 Many years ago, I reported on the earliest synthesis of the analgesic compound epibatidine from the poison frog Epipedobates tricolor. You’ll notice I was careful to say poison frog, not poison dart frog. In the prestigious pages of Science in 1993 I wasn’t quite so careful and describes this creature as a poison dart frog.

It was a simple mistake to make as there were dozens of references in the literature to this species as the toxic secretions of this and other frogs as being used in poison darts. However for E tricolor, this wasn’t and isn’t the case. It’s a toxic frog most certainly, but no one has ever tipped their darts with its secretions. The venom in the deluge of letters from readers wishing to highlight and correct my error while I was still a cub reporter writing freelance for the journal via its Cambridge office was enough to make my toes curl.

Anyway, the analgesic properties of epibatidine became famous. Several hundred times more potent than morphine, but with none of the addictive properties of its fellow opiates, it seemed that its career as a new painkiller was set. It has, as you can see from the picture, a quite stupendous chemical structure, which took several attempts to yield a total synthesis. Efforts are still ongoing I see from a quick scan of the current literature. A paper in JOC this month, has Armstrong, Bhonoah, and Shanahan wrestling with an aza-prins-pinacol approach to the 7-azabicyclo[2.2.1]heptanes of which epibatidine and its close cousin epiboxidine are examples.

It still surprises me that so little work seems to have been done to bring this compound and its analogs into the pharmaceutical fold. For instance, only a limited number of analogs have actually been synthesized and evaluated in vitro and negligible numbers have been tested in vivo. Given the enormous market a non-addictive painkiller with opiate-like power might share, I wonder why. Any pharma readers care to enlighten us?